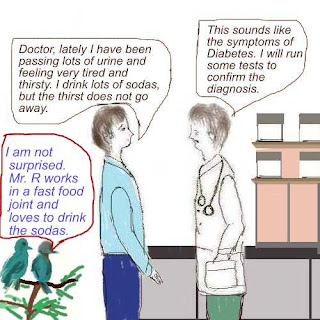 Scenario: Above is Mr.R who works in a fast food joint. He loves to drink sodas.
He is now beginning to experience the early signs of diabetes. He will learn from
his doctor he has diabetes. Scenario:Rick has a history of Type 2 Diabetes Mellitus. His blood glucose is high and
he has Insulin ordered twice a day. It is midnight and Rick is requesting his wife bring
snacks from home. Read more above----What is PVD?
Peripheral Vascular Disease (PVD) is caused by poor circulation.
The diabetic patient is at risk for this condition.


In diagnosing the problem, understand that following instructions may be a challenge
for diabetic patients.Patient and family teaching is necessary. 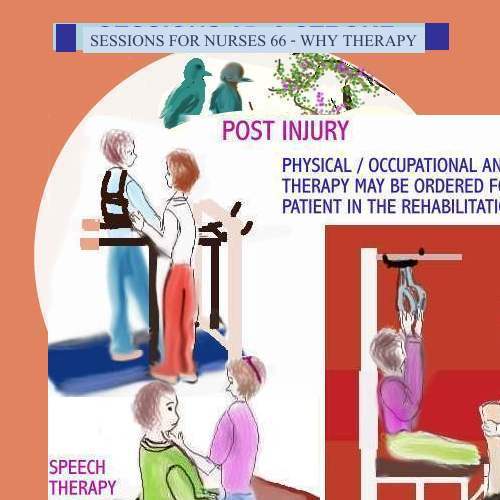 It is an established fact that some patients, depending
on diagnosis and treatment ordered , may require speech,
occupational or physical therapy.
Above is an example of a patient who had bilateral
amputations. She is being trained by the physical therapist
how to use a prosthesis and become independent.To learn more about this topic, please click on
the link and enjoy watching:
Sessions 66-Why Therapy

THE PLACENTA AND OTHER REPRODUCTIVE ORGANS 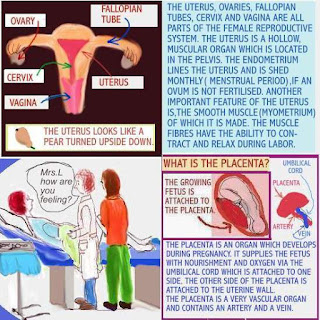 The placenta is an organ which develops during pregnancy. It supplies the fetus with nourishment and oxygen via the umbilical cord which is attached to one side. The other side of the placenta is attached to the uterine wall. The placenta is a very vascular organ and contains an artery and a vein.
The uterus, ovaries , fallopian tubes, cervix and vagina are all part of the reproductive system. The uterus is a hollow muscular organ which is located in the pelvis. Learn more by reading the image above 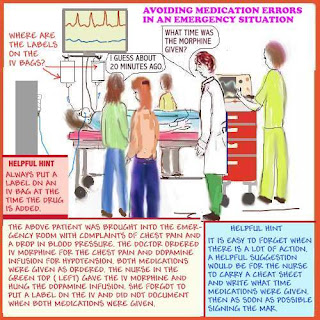 Scenario:The patient above was brought into the Emergency Room with complaints of chest pain and a drop in blood pressure.The doctor ordered    IV Morphine for the chest pain and Dopamine infusion for the hypotension. Both medications were given as ordered.  Please read above for more info ---- Helpful hint: It is easy to forget when there is a lot of action.  Read above---
Post a Comment
Read more 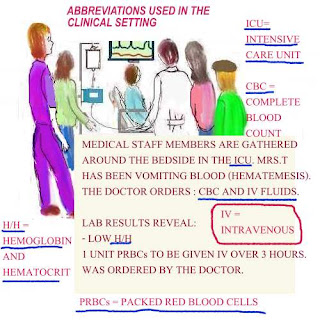 The image above is an example of how medical abbreviations
are applied in the clinical setting.
Scenario: Medical staff members are gathered around the bedside
in the ICU. Mrs.T has been vomiting blood ( hematemesis). The
doctor has ordered : CBC and IV fluids.
To learn more about medical abbreviations, click on the link:
/www.youtube.com
Post a Comment
Read more 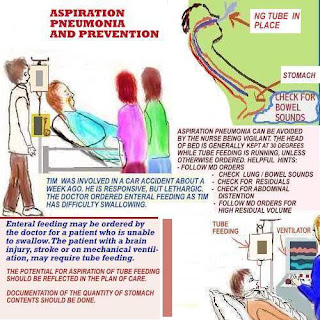 Enteral feeding may be ordered by the doctor, for the patient
who is unable to swallow. The patient with a brain injury , stroke
or on mechanical ventilation, may may require tube feeding.

The potential for Aspiration of Tube feeding should be reflected in
the plan of care. 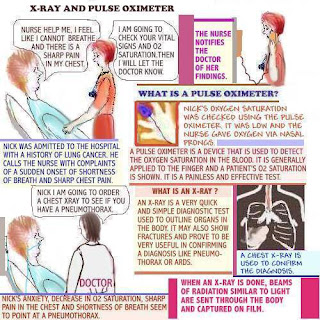 Scenario: Nick was admitted to the hospital with a history of lung cancer. He calls the nurse with complaints of a sudden onset of shortness of breath and sharp chest pain. Nick's oxygen saturation was checked using the pulse oximeter. It was low and the nurse gave him oxygen via nasal prongs. The nurse notifies the doctor of her findings.

What is a Pulse Oximeter?
A pulse oximeter is a device that is used to detect the oxygen saturation in the blood. It is generally applied to the finger and a patient's oxygen saturation is shown. It is a painless and effective test.

Scenario continued: Nick's anxiety, a decrease in oxygen saturation, a sharp pain in the chest, and shortness of breath seem to point at a pneumothorax. The doctor orders an x-ray to confirm the diagnosis.

What is an X-Ray?
An x-ray is a very quick and simple diagnostic test used to outline organs in the body. It may also show fractures and prove to be very useful in confirming a diagnosis, like Pneumotho…
Post a Comment
Read more
More posts

DEARNURSES-QUIZ ME NURSE
Welcome to Quizmenurse.blogspot.com. This is intended to be the sister site of Dearnurses.blogspot.com. This should not be used as a substitute for your institution's policies and procedures. It's simply meant to help nurses cover a broad range of topics and enhance learning.